Being the home to more than 350 ethnic groups, Indonesia is well-known for cultural diversity, and food is not an exception. Indonesian cuisine is a collection of different regional culinary traditions of the islanders. Lying stretched along the Equator with over 6000 islands are populated, Indonesia food including a wide variety of recipes and cuisines, estimated about 5,350 traditional recipes, with 30 of them are considered the most important. The most popular food in Indonesia is rice, noodle, and soup dishes. If you are looking for the most famous Indonesia food to eat on your Indonesia tour, you’ve come to the right place. Let check it out on the list below!

You might ever read some Indonesian food guide that the most famous food in Indonesia is fried rice, well-known as Nasi Goreng. The recipe is quite simple, just wok-fried rice with a host of salty seasonings. The rice is stir-fried in a little margarine and oil, seasoned with crushed chili sambal and garlic, then mixed with kecap manis which gives the fried rice its unique Indonesian touch. Nevertheless, this simple hot and fresh cooked single plate meal is one of the most popular street food throughout Indonesia making it become Indonesia’s national dish.
Depends on your own favorite hobbies, Nasi-goreng tastes well with curries, vegetables, chicken, egg and stink bean and many more. Another famous Indonesia national dish, Gado Gado, which is vegetables and compressed rice salad with peanut sauce (or cashew nut sauce). Although it is a salad, the dish also contains compressed rice cakes so it can be eaten as a main dish or a snack. Gado Gado is served widely at every Indonesian restaurant, but typically, it’s traditionally served as street food, specifically from mobile kaki lima street food carts. 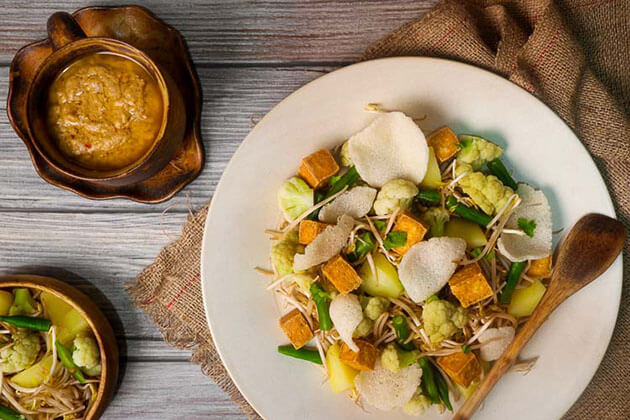 Soto is the traditional meat soup comprises a broth and ingredients that vary across the archipelago of Indonesia.
Common Soto street versions are made very simple with clear soup flavored with chicken, goat or beef. If you visit Jakarta, you will see it is home of the indigenous Betawi, Soto Betawi garners fame with its sweet, creamy, coconut-milk base. Soto is usually topped with crispy shallots, fried garlic, and as much or little sambal as taste buds can take. 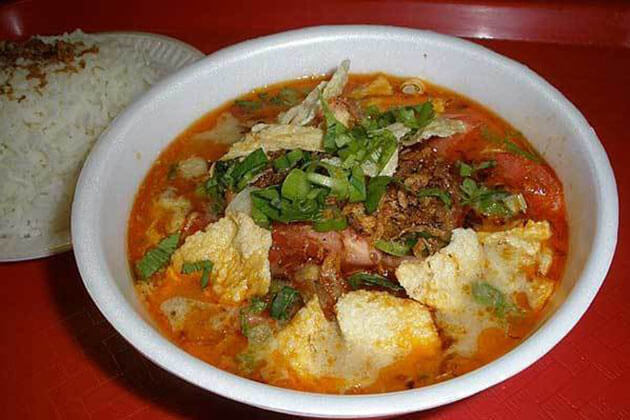 One of the most famous Indonesia food – Indonesian Satay said to date to the 1950s. It is sliced meat skewers that are cooked over coals. The Satay can be meat, chicken, or goat marinated in turmeric. Normally, these juicy skewers are poured with peanut sauce and served with rice cakes (called ketupat), diced cucumber and onion. It is Indonesia national dish which has been one of most celebrated food in Indonesia. Stroll around the street, you can see it is practically everywhere and highly addictive. 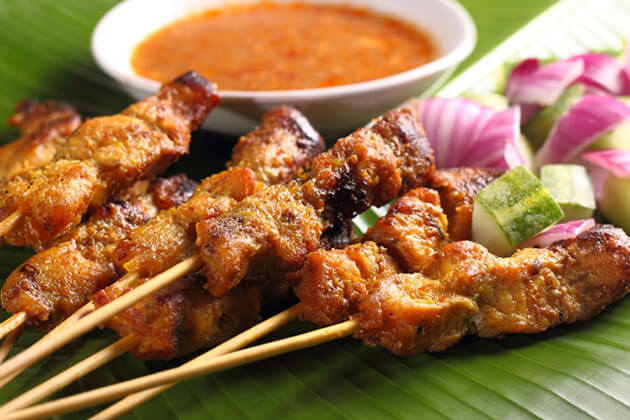 One of the prized Indonesian foods originating from Palembang (in the south of Sumatra) – pempek, is a unique type of fishcake which is very popular as a snack countrywide and Jakarta, the capital city as well.
The recipe for pempek not only includes pureed fish but also tapioca starch to give it a chewy bouncy texture. The pempek often deep-fried and sometimes is grilled as well. In every dish, it is served with noodles and sweet, salty, and sour sauces. 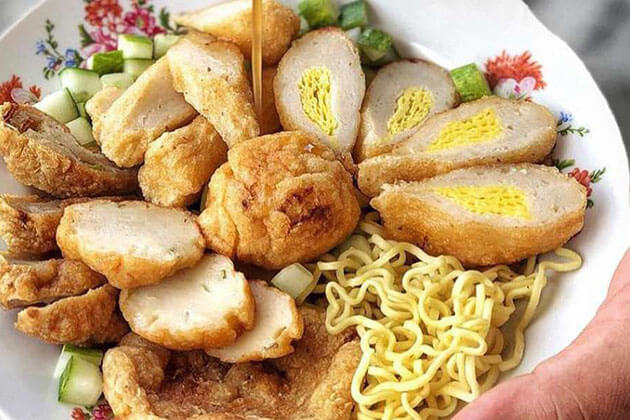 Nasi uduk is a fragrant type of cooked rice in coconut milk and includes a pinwheel of various meat and vegetable.
It is similar to nasi lemak, rice that’s cooked with a variety of aromatics like lemongrass, pandan leaves and dry spices like coriander seed, bay leaves, sometimes cardamom, and finally coconut milk. The result is a rich and savory, plus hearty and flavorful, rice. Nasi uduk comprised of a variety of different recipes, depending on the region of Indonesia you’re in. You can eat this delicious Indonesia food with a variety of different curries and Indonesian foods, but it’s also very common in Jakarta to eat along with simple fried chicken and sambal chili sauce. One of the most widely available street foods in Indonesia and in restaurants as well which are loved by nearly everyone, including President Barack Obama who grew up for some time in Jakarta, is bakso – Indonesian meatballs.
There are two main versions of bakso available, one is the Chinese style and the other is the more local Indonesian style – both are delicious. It is made typically by minced meat mixed with some tapioca starch – and it is the tapioca starch which gives the meatballs their serious bouncy and addictive texture.

You can typically choose your choice of noodles, from thin white rice noodles, and yellow egg noodles (I’m a fan of egg noodles), and the bakso are then either served with the noodles and soup or dry with soup on the side. Bakso is a non-spicy Indonesian dish, but if you like, there are always chilies and seasonings for you to add to your own bowl. Babi Guling is a popular Balinese dish which is basically roasted pork seasoned with various herbs. The dish was originally a communal dish served during traditional performances and ceremonies. A special mixture of traditional herbs and spices are stuffed and greased all over the meat before it’s roasted whole, resulting in a thorough flavorful taste that makes the dish unforgettable. 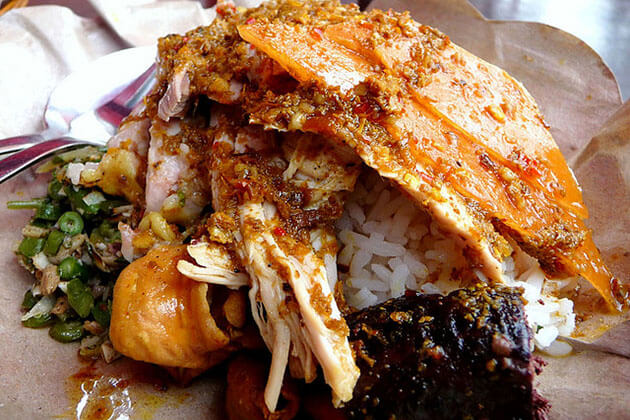 Another Indonesia traditional dish, originally from eastern Java, is rawon, a black colored beef stew. When I had my first taste of rawon, I immediately fell in love, and I knew I wanted to learn more about this exquisite and interesting dish.

Along with pieces of beef, one of the most important ingredients in cooking rawon is keluak (or kluwak). Beef rawon is served with the soup, rice and complemented with baby bean sprouts, a squeeze of lime, and sambal. 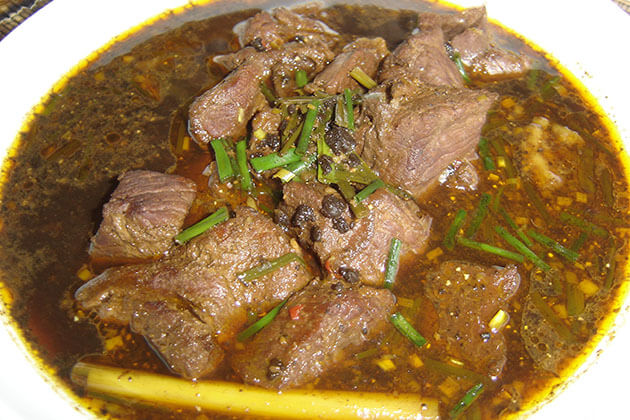 Well known as a Sundanese and Betawi dish in Western Java, sayur asem is a sour tamarind soup. It is made with meat stock or fish stock that can include a mixture of different vegetables like corn, chayote, and water morning glory. The soup pairs well with fried food since it’s stocked with vegetables and some of Indonesia’s most interesting ingredients: melinjo, bilimbi. 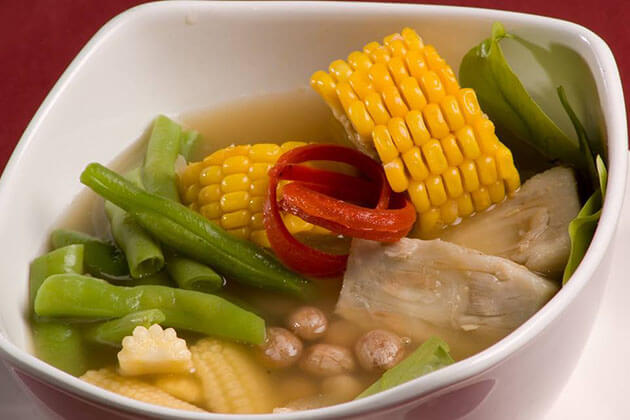 According to the legend, betutu was once the kings’ favorite meal. It’s not surprising, then, that the food is prepared in such a sophisticated way. A whole chicken or duck is chosen as the main ingredient of the meal, which will then be stuffed with an intricate mixture of spices that includes shallots, garlic, ginger, chili, peanuts, and more. It takes at least eight hours to prepare the meal, making it worth to try. 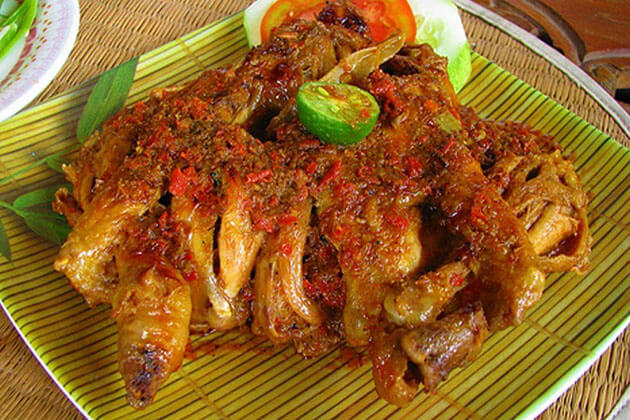 Martabak manis is a type of dessert, a popular Indonesia street food you might see across the country. It’s a soft pancake stuffed with some variations like condensed milk, peanuts, chocolate, nutella, cheese and much more. The buttery sweet flavor is the highlight. The martabak vendors usually sell another savory version, made of egg and meat. 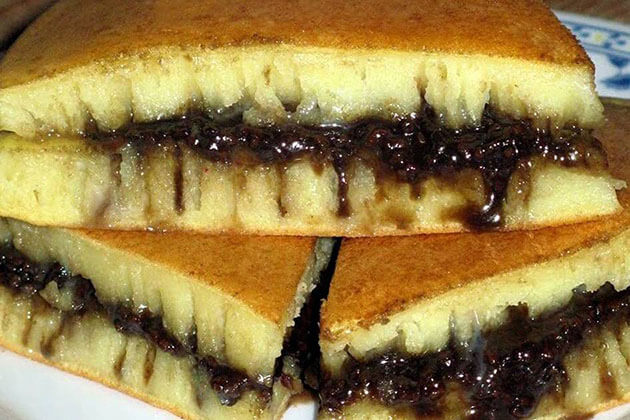 Soto Betawi, a savory soup, is another much-loved Indonesian street food classic among locals. While most Indonesian Soto dishes have a clear broth, Soto Betawi has a thick creamy broth made primarily with coconut milk. Among the other ingredients are meat, shallots, lemongrass, and Indonesian spices. This traditional classic tastes best with condiments. 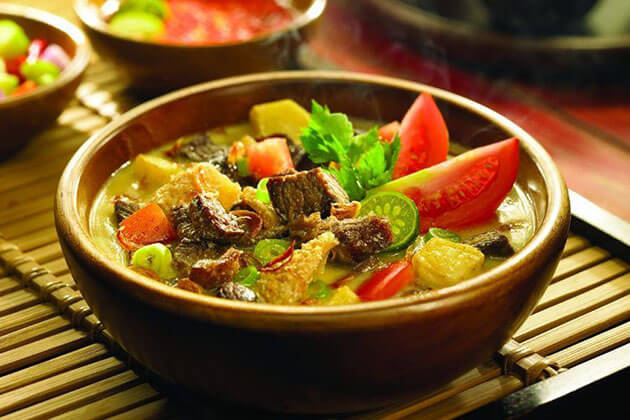