Possessing an array of enchanting islands, Indonesia’s natural scenery is truly a gift from Mother Nature. With over 17000 stunning islands, among them, more than 8000 islands have been inhabited, Indonesia has so many places to see. Below is the list of the most popular attractions to visit on Indonesia tours. Keep scrolling down to check it

Most Popular Tourists Attractions in Indonesia

Borobudur temple is one of the most famous and culturally significant landmarks in Indonesia. It was built in the 8th century and constructed in the shape of a traditional Buddhist mandala. Dating back to the 9th century, Borobudur is a UNESCO World Heritage site and is considered one of the greatest Buddhist sites in the world. In the past, the massive temple was forgotten for centuries, when it is believed that much of the population moved to eastern Java due to volcanic eruptions. But then it was rediscovered in the 1800s and, today is one of the main tourist attractions in Java. The best time to visit Borobudur temple is at sunrise where you can climb up the temple and for the breathtaking experience of watching as the complex is bathed in sunlight. 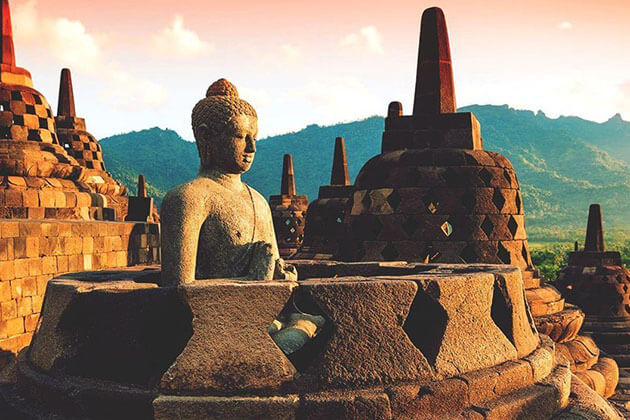 One of enchanting Indonesia’s natural wonders, Lake Toba is a breathtaking tourist attraction in Indonesia. It is a complex of both a body of water and a supervolcano. The natural lake, which sits in a crater, was formed between 69,000 and 77,000 years ago and is believed to have been the result of a catastrophic eruption. The lake measures at 1,145 square kilometers and 450 meters deep. To date, volcanic activity is still regularly recorded here and has pushed some islands above the water’s surface. Upon here, you can join in a variety of activities such as swimming, water skiing, canoeing, or fishing, or stick to wandering the surrounding area on foot or bike. 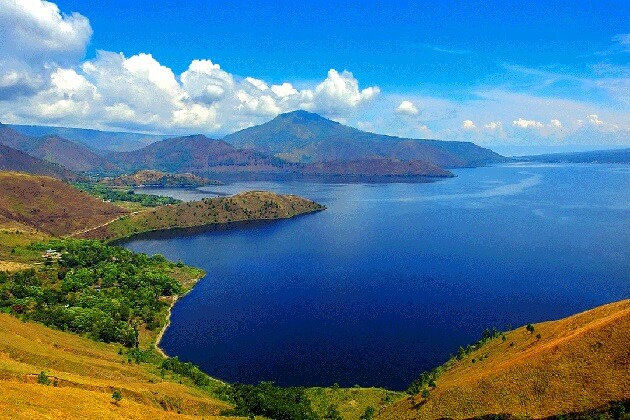 No trip to Indonesia would be complete without seeing the orangutans, and Borneo is a great place in Indonesia to visit these beautiful and endangered animals. Tanjung Puting National Park in Kalimantan, Borneo, is home to the largest orangutan population in the world, as well as other primates, birds, and reptiles. Come here, you will have a chance to have a closer look into their life in the wild. 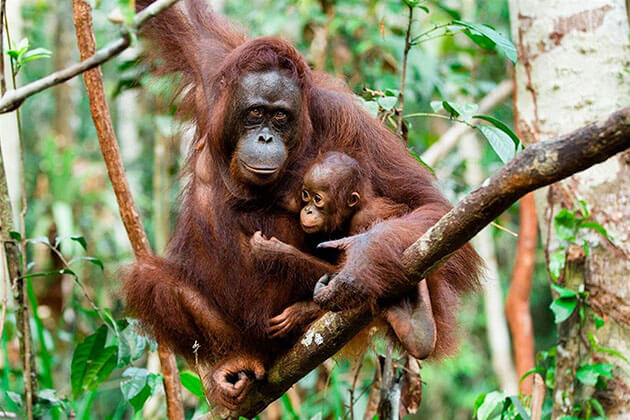 A major draw in Lombok, the Gili Islands are one of the most beautiful places in Indonesia which have risen in popularity in recent years. Not just beguiling with natural beauty, the islands are less visited, thus, offering a peaceful ambiance to relax. These picturesque islands offer tourists opportunities for diving and even snorkeling at a turtle sanctuary. If you love to see turtle action, you can check out a turtle hatchery where hundreds of these creatures are born each year. Additionally, kayaking is also a popular activity to do in the Gilis. Even more, if you’re seeking a place to reconnect with your mind and body, you will find several options for yoga classes. 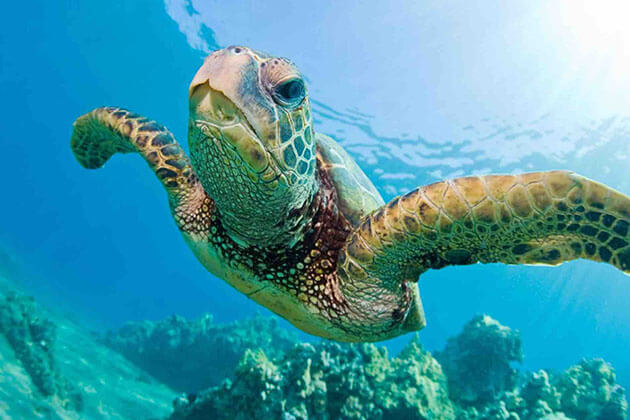 Lying on Ring of Fire, an area with some of the most active volcanoes in the world, it is a big mistake if we forget to talk about the volcanoes in Indonesia. Among them, Mount Bromo is among the best known, making the place one of the most popular attractions in Indonesia. Thanks largely to its incredible views, Mt Bromo is attractive in the glorious sunrises with the backdrop of the magnificent cone. 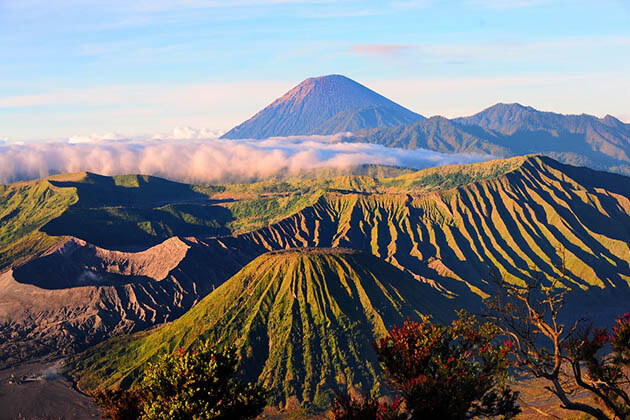 Located in South Sulawesi, Tana Toraja is an enchanting attraction in Indonesia. Upon here, you will feel like you’ve stepped far back in time to look at the richness and diversity of the country’s long-lasting cultures. The architectural style of Tongkonan, boat-shaped houses and other buildings making the site standouts. Nevertheless, the people are what make this piece of natural paradise so special. The islanders are the friendliest and most welcoming people that you could hope to meet while traveling. Also, their exotic culture is also a highlight for you to visit and get more knowledge. 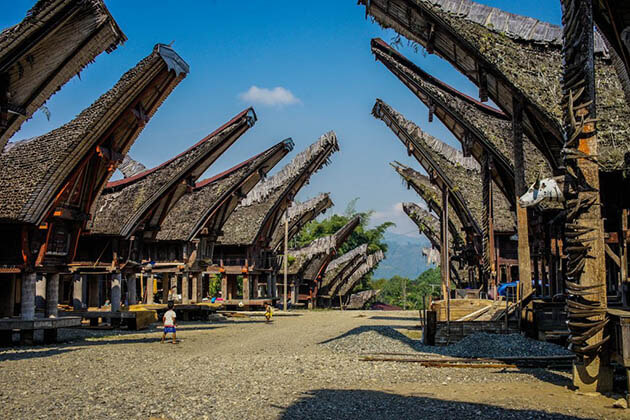 Located in the western province of Papua New Guinea in the West, Raja Ampat Islands is a stunning tourist attraction in Indonesia for divers who are interested in the beauty of underwater scenery. This world-famous island paradise is home to the incredible world underwater including thousands of different species of coral, fish, and mollusks. 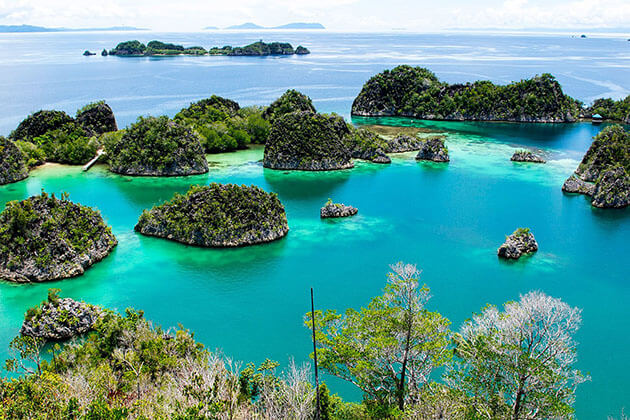 Lying in Eastern Java, Mt Ijen is one of the groups of volcanoes within a huge acidic blue-water crater.
Ijen is an active (albeit quiet) volcano in East Java, and the Ijen Crater is its turquoise sulfur lake near the summit. With a surreal sight, especially at night, when the combustion of sulfuric gasses emerges as what’s known as the “blue fire” lighting up the sky, Mt Ijen is no doubt one of the best places to visit in Indonesia. Tourists visiting the sights can trek up to the crater or in the foothills, the beauty of the place is enthralling. 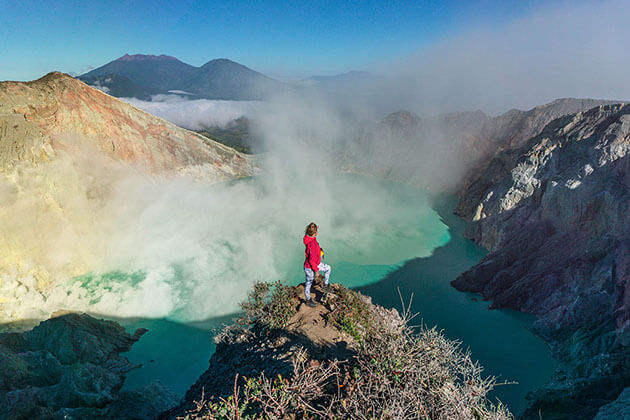 Being rich abundance in marine flora and fauna, Bunaken Sea Park is the next spot in our list is among the most beautiful places and a famous tourist place in Indonesia. The sight possesses numerous exotic and endangered fish species. The water here is the bluest of blues, the walls are adorned with corals, the shallows are occupied by clouds of reef fish, huge turtles laze on ledges and upon closer inspection, the corals harbor all manner of macro critters. Diversity is the word of the day. In Bunaken you won’t just find giant clams, you’ll find 7 out of the 8 species of giant clams that exist worldwide. Butterflyfish are found at every dive site and there are over 33 species. Needless to say, you will have to see it to believe it. 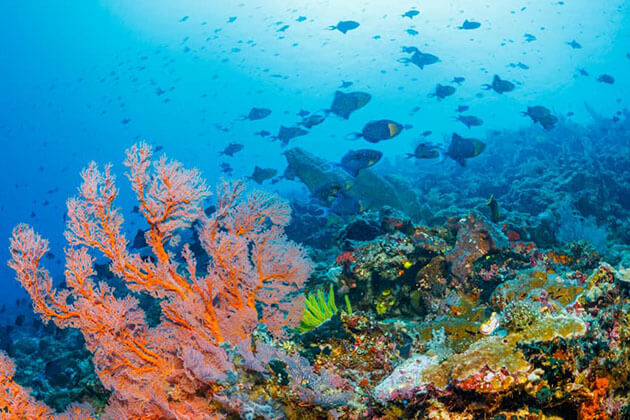 Located in East Nusa Tenggara, the small island of Flores has the whole package: breath-taking nature, flourishing wildlife, and exotic culture. The Wae Rebo Village, with its iconic traditional houses, and the Kelimutu Lake are among the most popular destinations to visit on a trip to Indonesia.
The island of Flores in Indonesia means ‘Flowers’, although you won’t find any flowers here. Instead, the underwater vistas are one of the best places in the world to go diving, and the main reason for travelers to go there. 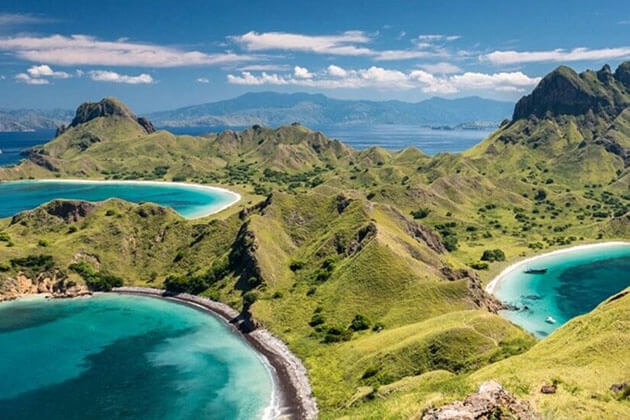 If you are seeking for the beautiful emerald-hued rice fields, the Tegallalang or Jatiluwih rice terraces are a must-see attraction in Bali. These destinations are one of the most famous areas for a photography tour to the iconic landscapes and absorb the man-made masterpiece. There are some restaurants and coffee shops nearby providing great views to the fields. 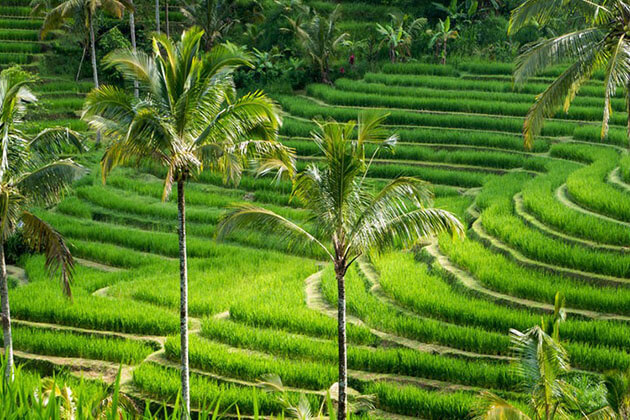 Being the cultural heart of Bali, Ubud is the must-see attraction in Indonesia for every traveler spending their vacation on the island. The best highlight of Ubud is the Sacred Monkey Forest, a serene space where you can feel the ancient majesty of the island. At this Hindu temple, you’ll witness many long-tailed macaques, a species of monkey commonly seen throughout Southeast Asia. The temple is also an interesting visit to observe the Balinese Hinduism combines aspects of several different religions, which make it unique among other types of Hinduism practiced today. 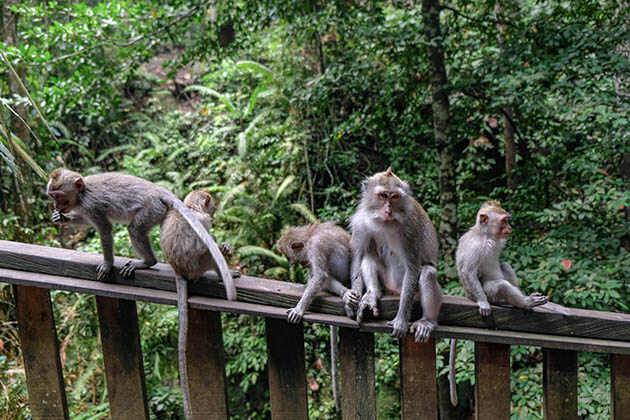 Perched dramatically on the sea cliffs above one of Bali’s best surf spots, Uluwatu Temple (or Pura Luhur Uluwatu) is one of the island’s most famous temples, thanks to its magnificent clifftop setting.
Regarded by legend, the temple is believed to protect Bali from evil sea spirits, while the monkeys who dwell in the forest near its entrance are thought to guard the temple against bad influences. A scenic pathway snakes from the entrance to the temple with breathtaking viewpoints along the way. Only Hindu worshippers are allowed to enter the temple, but the beautiful setting and the Kecak dance performances that take place here daily are more than worth the visit.
Sunset is the best time to visit the temple when the sky and sea glow in the late afternoon light. 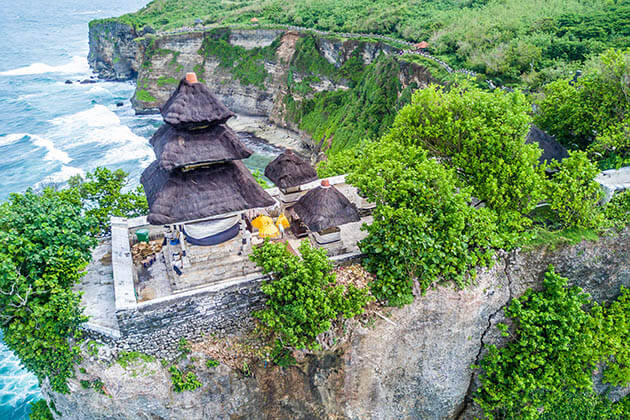 On a small stunning island along the western shore of Lake Bratan, set in the cool highlands of central Bali, the 17th-century Pura Ulun Danu Bratan is one of Bali’s most picturesque temple and one of the best attractions to visit in Indonesia. For a long time, Lake Bratan is one of Bali’s main sources of irrigation and drinking water, for people in Bali. The sacred temple thus was built to dedicate to Dewi Danu – the Goddess of the Water. Nowadays, it is not the only place for worshipers but also a great attraction for any Indonesia tours. Set against the dramatic backdrop of Gunung Bratan, the thatched temples reflect on the lake, and when the water levels rise, they seem to float on its surface. An unusual feature is a Buddhist stupa on the left of the entrance to the first courtyard, with figures of Buddha meditating in the lotus position in niches on the square base. The stupa reflects the adoption of Buddhist beliefs by Balinese Hindus. Early morning is the best time to behold the fascinating beauty of the temple when there are fewer tourists. You can also hire a canoe and paddle out on the lake to explore the Meru (thatched shrines) at close range. 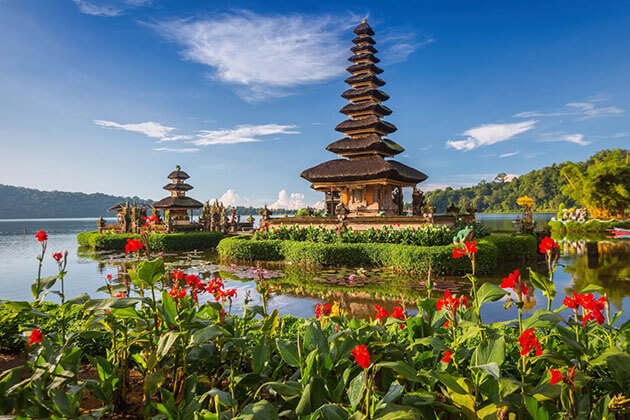