Being a country of multi-ethnic groups, Indonesia’s religions are diverse throughout the country. An Indonesia trip reveals many amazing facts about Indonesian people that you don’t want to miss. Before you go, let have an introduction to Indonesian religions as below

In terms of history, immigration from India, China, the Arabian, and Portugal has been a major contributor to the diversity of religion and culture within the archipelago of Indonesia. Before the arrival of the Abrahamic religions of Christianity and Islam, the popular superstition systems in the region were overwhelmed by Hinduism and Buddhism. These religions were practiced in Indonesia around the 2nd and 4th centuries. Respectively, when traders from India arrived on the islands of Java, Sumatra, and Sulawesi.

Islam was first introduced to Indonesia in the 14th century. Deriving from Gujarat, India, Islam spread through the west coast of Sumatra and then developed in the east of Java. The Portuguese introduced Roman Catholicism into Indonesia and the Dutch – Protestanism in the 16th century. Later, Christianity spread from the coastal harbors of Borneo and missionaries arrived among the Torajans on Sulawesi.

Significant changes in Indonesia’s religions occurred during a period called the New Order era. Every Indonesian had to carry a card indicating their religion. The policy resulted in mass religious conversions. The same situation happened with Indonesian citizens of Chinese ethnicity, who mostly were Confucianists. Because Confucianism was not one of the state-recognized religions at the time, many of them also converted to Christianity.

Overall, the development of the Indonesian religion has gone a long way. Meanwhile, each religion in the Indonesian archipelago has spread in leaps and bounds and embraced by the indigenous people in every territory until now.

Muslims constitute the majority of the Indonesian population. As a result, Islam has a strong impact in Indonesia with numerous hoardings and signs written in Arabic for the convenience of the citizens. Traditionally, Muslims have been concentrated in the more populous western Indonesian archipelago such as Java and Sumatra and in less populous eastern islands, proportionally lower. Around 99 percent of Muslim Indonesians are Sunnis. The remaining one percent are Shias those who settle in Aceh province. 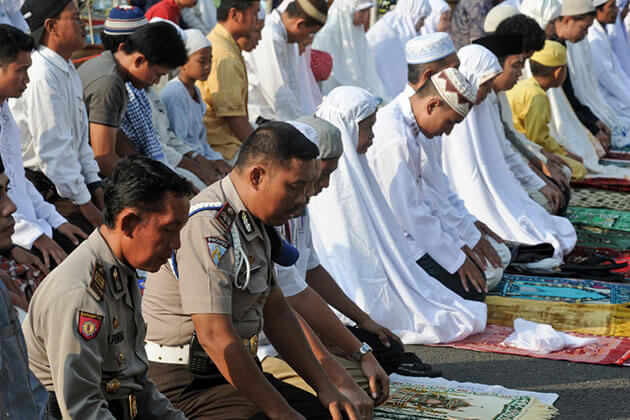 The history of religion is complex and reflects the richness in the diversity of Indonesian culture. Trade played an essential key in the Islamization process of Indonesia. Dominant Indian Muslim traders went to Sumatra, Java, and Kalimantan islands where the religion flourished between the 12th and 15th centuries. This made the predominant religion of the time – Hindu and Buddhist, mostly converted to Islam, the remaining perished.

Although Indonesia is not an Islamic state, many of the laws passed by the government protect their interests. Famous Mosques in Indonesia: Istiqlal Mosque (Jakarta), Baiturrahman Grand Mosque (Banda Aceh).

Hinduism is the oldest religion in Indonesia, or you can say the world. The religion arrived in Indonesia in the 1st century, at the same time the arrival of Buddhism, resulting in a number of Hindu-Buddhist kingdoms, for example, Kutai, Mataram, and Majapahit – the greatest Hindu empire that ever flourished. This period, the Hindu-Indonesia period, lasted for 16 centuries. 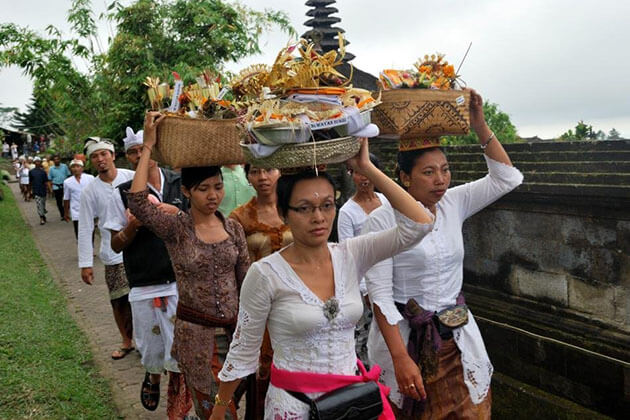 Hinduism in Indonesia is distinct from other parts of the world. Rather than focusing on cycles of rebirth and reincarnation, it is more related to a myriad of local and ancestral spirits. Additionally, religion focuses more on art and ritual than scriptures and laws. Practitioners of Agama Hindu Dharma share numerous common beliefs.

Among all official religions in Indonesia, Hinduism has the longest history in the archipelago. However, on most islands in the country, this chapter in its history has been erased by time or conquest. Bali, however, stands as an exception. Hinduism is still the main religion of Bali, and you will be able to find the most passionate followers there. Besides Bali’s breathtaking scenery, Balinese Hinduism is a major reason for tourists to visit Indonesia.

Buddhism has played a crucial part in the religion of Indonesia. Buddhism as a religion stands for conscience, morality, and beliefs. The history of Buddhism and Hinduism in Indonesia is closely related. The main reason is that a number of kingdoms linked with Buddhist culture were established around the same time. In the 2nd century of the Common Era, Buddhism spread to Southeast Asia through the same trading activities on the Silkroad between Indonesia and India which had made Hinduism popular to the Indonesian archipelago one century before. 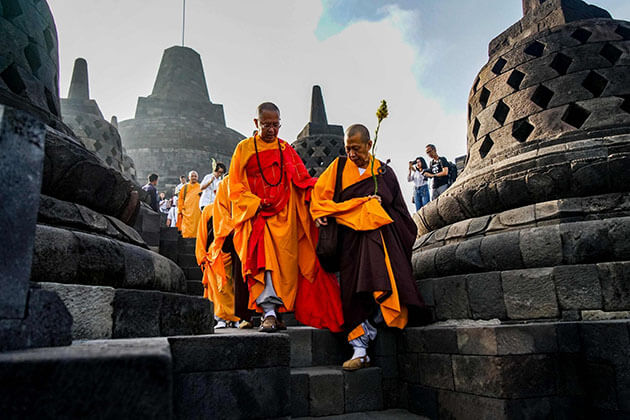 During the Majapahit Empire’s fall, Buddhism underwent a significant decline in the number of its followers. Most of them converted to Islam or migrated to other parts of the globe. Nowadays, most of the Buddhist practitioners in Indonesia consist of Chinese immigrants.

There are various sites on Sumatra and Java where you can find Buddhist remnants in the 2nd – 15th century period. Famous Buddhist Temples in Indonesia: Borobudur Temple (Central Java), Mendut Buddhist Monastery (Mungkid).

Christianity is the second-largest religion in Indonesia, although relatively minor in comparison with Islam. One clear example of the lasting influence of the European and Dutch colonial era on Indonesia is the population of well about 23 million Christians currently living in Indonesia, making up for nearly 10 percent of Indonesian citizens. Indonesian Christianity is comprised of Protestantism and Catholicism, the former being the majority. These Christian communities tend to concentrate in Eastern Indonesia. 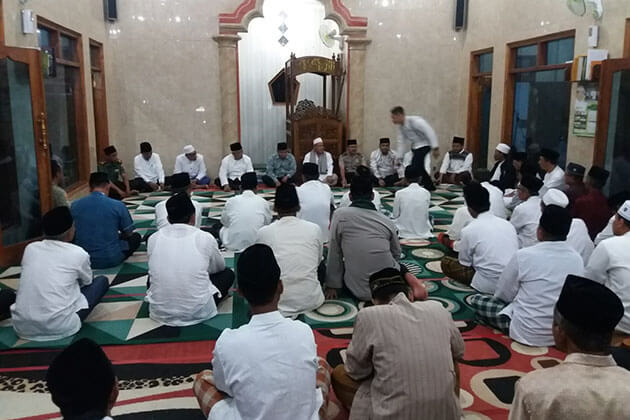 Although violent incidents used to occur between Muslims and Christians, most notoriously the 1999-2002 Muslim-Christian conflict in the Moluccas, practitioners of both religions generally live in harmony across the archipelago. Famous Churches in Indonesia: Regina Caeli Church (Jakarta), The Palasari Church (Bali), The Pohsarang Church in Kediri (East Java).

Confucianism originated from mainland China and was brought into the Indonesian archipelago by Chinese merchants and immigrants, starting from the 3rd century of the Common Era. Confucianism was born out of the teaching of Confucian. Confucian was a very famous Chinese philosopher, an avid reader, and a writer. 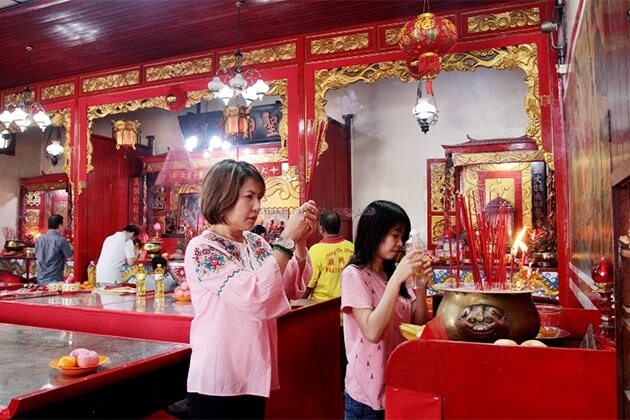 The religion first arrived in the country during the 17th century and was followed by a massive rise in political drama, especially during the New Order era. For that reason, the government banned Confucianism and forbade its citizens from pursuing it. Nowadays, Confucianism followers are less than percent and the religion is perishing in Indonesia. Famous Confucian Church in Indonesia: Boen Bio (Surabaya).